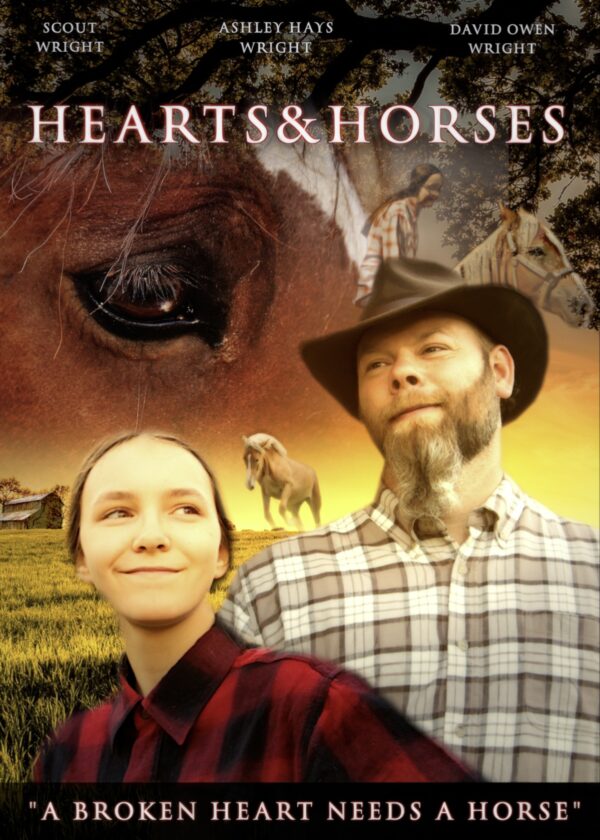 A teen girl comes to live with her father that she had never known, and a horse he is caring for helps her to adjust to her surroundings. Despite her reluctance, she comes to bond with both the horse and her father.

This film clearly shows that what is unfamiliar in the beginning, can become a source of great joy if given time. Daniel (aptly played by David Owen Wright) is a farmer who has taken in a few horses to care for, mainly on behalf of his friend Fern (Ashley Hays Wright). Daniel likes Fern although they are not, at least yet, a couple. Ashley Hays Wright does a good job in directing this movie, giving the viewer some energetic scenes from the horse’s point of view, and she focuses on character development. This is a character-driven film.

A lady named Mary surprises Daniel when she shows up at his door one day, accompanied by a teen girl. Mary explains that the girl, Daniela (or “Danny” for short), has just lost her mother, and that Daniel is, unbeknownst to him, the girl’s father. This was the result of a relationship from years before. Daniel is thrown for a loop but agrees to care for the girl.

The ensuing scenes make for an interesting story as Daniela has no experience in dealing with farm life, and soon she is up early to feed the horses and to clean their stalls. In a funny scene, she asks if Daniel has an Xbox or TV, which he doesn’t. He’s not even online! It’s like a foreign world to her, living on this farm. Daniel, early in the going, prays that Daniela will have enough strength “to shovel all that out of that pen!” In one of several humorous scenes, Daniela is sitting near a horse, when he pops his head down to look at her, surprising her. “Oh wow, your head is huge!” she proclaims.

Yet slowly, but surely, Daniela forms a bond with Jack, the main horse she cares for, as well as with Silver, his female companion horse. In one scene, as she is cleaning out the stalls, Daniela comments to herself, “I can see why cowboys wear boots!” Daniel, in various scenes, prays for the Lord’s strength in learning how to cope with a girl that is about to turn 16. He reads his Bible too. In one scene Daniela wants to know when she can take Jack out of his pen, but Daniel assures her that Jack first needs to learn manners. Scout Wright does a good job in portraying Daniela, who emerges from being an angry, withdrawn teenager, to a caring and blossoming young lady, caring and curious.

Daniel, wishing to do something special for his daughter, asks Fern’s help in throwing her a sweet 16 party. Fern plans to invite some girls Daniela’s age, and to have all the fixings for a great party. Music is an integral part of this film, played during the birthday party and during various scenes of the film. The songs have meaning, such as one that says, “My mama told me, don’t sell your soul…” Another one features the line, “You came along and took away the hurt of my memories.” Daniela deals with missing her mother at times, even asking her horse, “How do you deal with not having a mother?

The film deals with important themes, such as dealing with transitions in life, moving to a new place, losing a parent, and adjusting to new relationships. It also shows how one of the main characters relies on his faith in God, and in reading the Bible and in praying.

There are things to think about while watching this family film. How can children deal with unfamiliar situations and what support can be given to them to help them successfully navigate these times. In one scene, Daniela thinks she is about to lose Jack, that’s he’s being given away, and she deals emotionally with her. But she learns the news isn’t exactly what she thinks. It’s important to encourage children to realize that difficult situations can lead to good things if patience and fortitude are added to the mix. This film has procured our Dove seal for All Ages.

The Dove Take: This story is simplistic and yet powerful in its portrayal of appreciating the blessings and the people in one’s life.

A man reads his Bible and prays to the Lord; a song about angels.

A man adjusts his life to care for his teen aged daughter; a woman helps her friend out and sets up a birthday party for his daughter; a girl comes to faithfully care for a horse that she likes.

Just that years before a character had unknowingly fathered a child; today he is a devoted follower of God.

A chicken pecks a girl who responds with a couple of “ouch” comments.

A woman in shorts

A girl adjusts to new surroundings; a bit of tension between a few characters