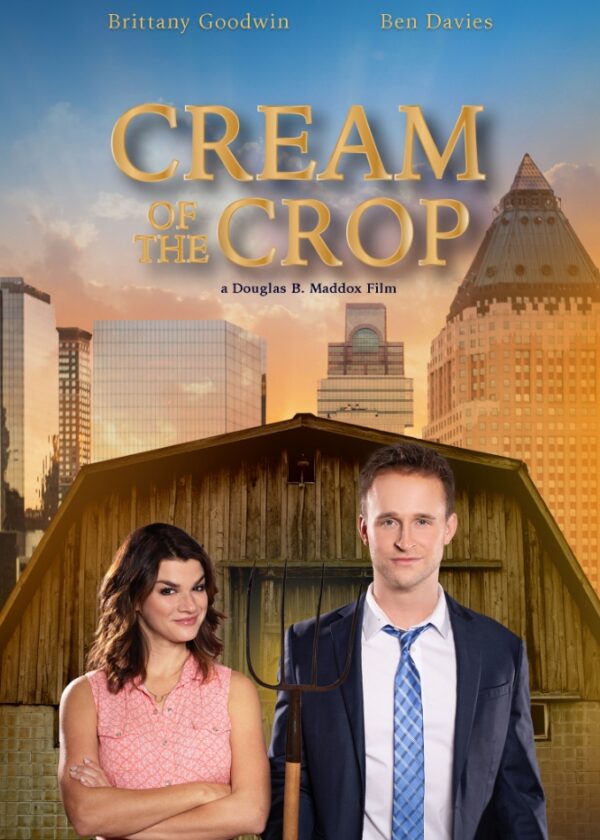 Cream of the Crop

Cream of the Crop’s Mike Jared (Ben Davies), is a successful, young real estate marketer, graduate of the school-of-cool, and star of the birthday beer chug, when he meets Jodi Stafford (Brittany Goodwin), his sister’s coworker. High school Agriculture (AG) teacher Jodi Stafford,  born and bred in farm country, is none of the above but sometimes mutual attraction ignores everything else.  Soon Mighty Mike finds himself aiming to please, diligently taking on the rural challenge of farm work to show Jodi his hide is as tough as any.  This is too ripe to pass up and the farm hands sneak in a giggle when Mike is pecked by a mother hen, steps in cow manure, and gets shocked by an electric fence while using ‘the great outdoors bathroom’.  Ouch!

Obviously, this farm thing is a novel challenge to Mike, and Jodi is stubbornly patient as she teaches him farm protocol.  Not so patient is Jodi’s father Bob Stafford (Randall Oliver), who tells it like it is.  At dinner, between the mashed potatoes and mountain oysters, Mr. Stafford describes Mike as an astronaut, “just takin’ up space.”  But with Jodi’s encouragement, Mike lets it roll off his gym-sculpted shoulders.

In the meantime, Skip Stevens (Ken Sandburg), an AG speaker and advocate, has come to visit the Stafford farm during his stay. Quite the farm expert, Skip quickly wins Mr. Stafford’s admiration, while secretly tilling up some bad soil between Jodi and Mike.

Mysteriously, a rock in the hay processor causes a farm accident, injuring Jodi’s brother Frank (Jeremiah Wiseblood).  All incriminating eyes look at Mike who is the wrongly suspected culprit, and per story formula, he argues with Jodi and leaves, not planning to return.

From here, things take odd vectors: Cows are poisoned, the vet just pops out of nowhere, a farm hand, Willie (Cody Keech) goes on the attack, and Skip returns one night in an attempt to sexually assault Jodi. Who pulls out a huge, loaded rifle that abruptly stops that action.  Unfortunately Jodi brushes off the incident and Skip suffers no retribution.  We never find out who put the rock in Frank’s hay processor, although clues suggest it was Skip. And all the while, a heavy awareness hangs in the Staffords’ hearts that the farm is about to be tillage for the bank.

Tech-wise, Cream of the Crop presents nice cinematography, although some of it could be shaved to shorten the film. In that vein, a few ‘romance’ scenes could be cut more efficiently. The score foreshadows well some suspenseful scenes.  This time, the males, Ken Sandburg, Ben Davies, and Matt Mickelson, who plays developer Jim Poole, take the big blue ribbon in acting. Unfortunately Jodi’s part seems miscast as a romantic lead, and the chemistry between she and Mike isn’t too convincing.

We understand and appreciate the central message of the film — that the institution of the farm must remain, that hard work close to the earth gives meaning to private ownership and is essential to remind us from where we have come. Likewise, the premise that people think farmers and ranchers are some kind of Neanderthals is not a true reflection of community opinion.  And speaking from Texas, I can say I’ve never seen a group of ranch hands go practical joking on someone just because their car or driver is fashionably urban.

Overall, Cream of the Crop has both pleasant and important scenes, but the sexual assault attempt, profanity with fighting, and shooting at kids on four wheelers pop it out of the Dove.org ballpark, and is not Dove-approved.

Cream of the Crop reminds us of the value of hard work and private ownership, but also contains assault scenes which may be offensive to Dove families.

Predominately secular. No Gospel.  No prayer except a plea to God from Jodi when her brother is injured.

Mike consistently works to win the favor of Jodi and her family, despite many obstacles.

Men fight.  Rifles are used to shoot at kids on four-wheelers. Skip puts his hand on Jodi’s chest, then attempts to sexually assault her.