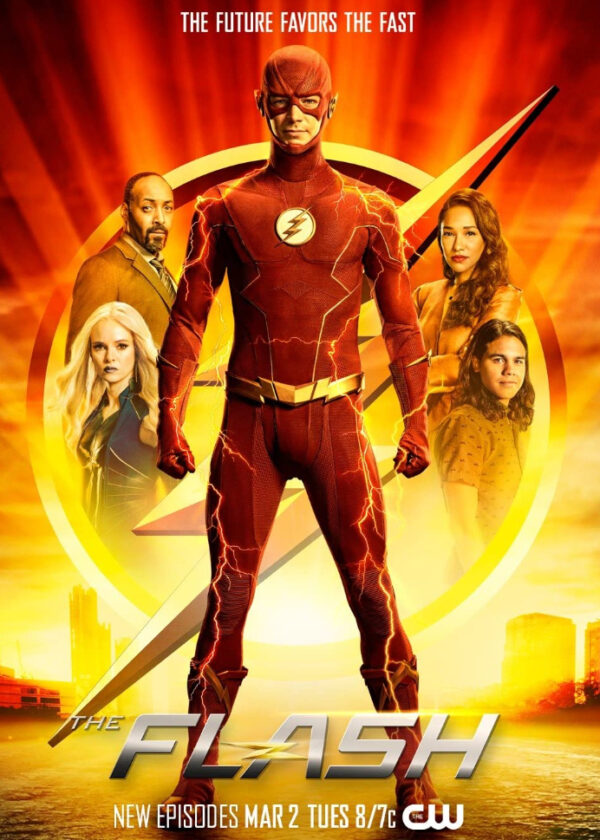 After being struck by lightning, Barry Allen wakes up from his coma to discover he’s been given the power of super speed, becoming the Flash, fighting crime in Central City.

The Flash TV series is now in its eighth season, and its longevity speaks to its amazing special effects and comic book-like adventures. It’s a fast-paced show which features science-related plots which involves various characters trying to wreak havoc and cause destruction. It is up to Flash, Barry Allen, solidly played by Grant Gustin, and his team of heroes to overcome the various evil plots which the villains intend to make happen.

If I found one thing to be a slight hindrance to my enjoyment of the series, it is the much often-quoted scientific principles relating to various plots which I had a hard time, at least occasionally, following. For example, Flash is struck by powerful photons in one sequence, knocking him out. Now I know that photons sound scientific — and pretty cool too, but I could not tell you what they do. There are also comments about black holes, multiverse particles, as well as what causes Barry Allen’s speed. And, in the second episode of season 7, Barry gains speedy thinking. No doubt many fans of the comics and series will follow along just fine with the technical jargon, while average thinkers like me will have to take it by faith that these things they speak of are real or could actually-possibly-happen! And a character named Nash Wells speaks of a book titled Organic receptors in nuclear physics. Yep, I totally understand that title, LOL!

The special effects are, as previously stated, awesome and when Barry runs fast the yellow lightning streaks truly add to the power of the sequences. Yet the humanity of the characters is nicely placed in various scenes. For instance, in one scene when Barry is knocked down by an electrical charge, his friend and fellow scientist, Chester P. Runk (Brandon McKnight), repeats, “Please, be okay, please be okay!” And a woman named Gideon is concerned that Barry might die. These moments of humanity and compassion are nice elements featured in the episodes. Their weaknesses are seen, and compassion, as well as their scientific prowess and intelligence. For example, in one scene Nash Wells admits to having lied to Gideon, and he regrets it. Yet Barry tells Nash he believes in him, despite his failures, and it is in these moments that the show really shines. Not to mention every time Barry does his super-speed running!

This series is an incarnation of DC Comics and it’s actually a spin-off from the Arrow TV series, existing in the same fictional universe known as “Arrowverse.” Barry dons his Flash costume to be the superhero he is when he is needed to help someone or to thwart crime. Interestingly, the series was just renewed for a ninth season beginning in the fall of 2022.

In one sequence, a bomb in the city could cause hundreds of people to die, and Barry must super speed in time to stop it from happening. The series features people assisting and helping Barry and in this case Nash Wells helps him to be successful.

In the second episode of season 7, Barry suddenly gains the power of speed thinking, and he attempts to use his new gift to save Iris, the woman he loves. Cisco, his friend and fellow scientist, is hesitant to trust this new speed-thinking power, and the character of Eva faces a shattering truth. It is apparent that Flash would not be where he is without the help of his entourage. And the character of “Frost” helps The Flash and Joseph fight against the evil Eva.

The characters are rich in these episodes, and good vs. evil is always at the forefront of the various stories and plot lines.

The series features comments about portals, a multiverse, and many scientific theories, but it also contains a lot of action and The Flash’s super speed treks to save the day. Barry Allen is, at times, a complicated character, but his goals are always simple-to save other people in a jam. One great line comes from a villain who says, with glee, “The Flash is going to stop me? He can barely run!” But, this won’t last long, which is good for The Flash, and for the TV viewers.

The series contains a few words of language, but it is not gratuitous. The series has procured our Dove seal for Ages 12+.

For lovers of science, adventure stories, and great special effects, this is a series you will certainly enjoy.

Several characters assist The Flash to make sure Barry is successful in fighting crime and evil; a character tries hard to get his companion back from a multiverse; people work hard to stop a bomb from killing many people.

Characters strike each other with lightning-like flashes of energy;  a few characters are hurt from battles and fights; a character is struck by a photon laser gun; a character is killed by her doppelganger.

A wine bottle is seen.

Tension between characters; deceit and betrayal.