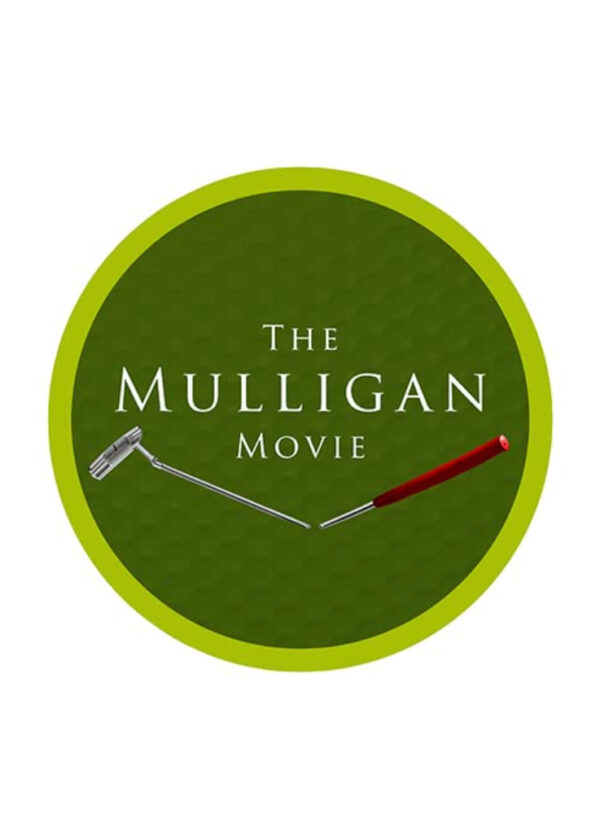 Paul McAllister seems to have it all, but his life starts to fall apart. Guided by the wisdom and advice of an old golf pro, Paul learns about playing a good game both on and off the course.

The Mulligan is a wonderful inspirational story, featuring Pat Boone as an elderly wise man, “Old Pro” Will Dunn, who imparts more than golf advice to Paul McAllister (Eric Close). Eric Close does a nice job in his role as McAllister-and he’s in the majority of the film’s scenes, so a lot of the movie works because of his acting skills. He starts off as a bit of a hardened man, leading his own company. He emphasizes the following three important goals: 1. Performance 2. Perfection and 3. Profit. By the film’s end, his goals will have changed significantly. But getting there won’t be easy for him.

We learn that he is separated from his wife, Rebecca (Tanya Christiansen), and he’s estranged from his son, Jake (Andrew Brodeur), who declares that he “hates” his father. Apparently good old Dad wasn’t around much while Jake was growing up. In fact, in a scene in the movie he later tells his father he never tried to stop him from using drugs and getting high. “You didn’t use drugs,” responds McAllister. “How would you know?” asks Jake.

Mom, on the other hand, is proud of Jake, who just won a trophy in a motorcycle race, something that brings him about 50 grand a year. When Mom tells Jake she will be praying for his father and he at the ladies’ prayer group, Jake replies, “God’s warranty on him coming back has expired. He’s married to his business.”

Written by Rick, Randall and Roland Eldridge, and directed by Michael O. Sajbel, this nicely directed film is probably a template for many modern homes. The dad is the breadwinner but becomes obsessed with making money and forgets the very people he is attempting to support.

McAllister is a golfer, and he plays in the 10th Annual Currahee Pro-Am Charity Golf Classic. The “Old Pro”, Dunn, begins speaking to McAllister about the “Mulligan,” and he gives him an oral history of the term. Meaning a “do-over”, it refers to, unofficially, allowing a golfer to take another stroke, or to be given another chance to improve on what he just did. Dunn likens it to life, and how that very human people sometimes need second chances to get things right. You don’t necessarily have to know golf well to appreciate the movie. Although it has some golf scenes, and it’s mentioned a birdie would help Paul’s team get an Eagle, usually good old Dunn is rattling off comments to Paul about the importance of one’s family life. Pat Boone does an excellent job in the role of Dunn, as he is likable and believable when he imparts his words of experience and of life. And McAllister needs them all. In one scene, his caddy gives him advice about the wind and hitting the ball, and McAllister responds with, “Just carry my bag and hand me the club that I ask for, and we’ll get along just fine!” McAllister is not happy as he’s late-and must start his game without first warming up. In another scene he comments that he heard the game was called “golf” because all of the other four-letter words were taken!

Dunn slowly gets McAllister to open-up about his family, and that’s when he uses the metaphor of the Mulligan, based on the name of a real man named Dave Mulligan. It slowly dawns on McAllister that he needs a Mulligan or two in his life. Dave Mulligan had arrived by car for a golf game and had traversed a rickety bridge, which rattled him and caused him to miss his T-shot. He begged his friends for a do-over. And though it might not have been the very first one allowed, it was memorialized and is now associated with Mulligan.

Dunn gives McAllister a journal to write down his solid shots on the left side of the page and his Mulligans on the right, to get his game back in shape. He also challenges McAllister to think of where he’s at in life, not just in the game of golf.

The movie features several dramatic instances, including Jake getting into a serious accident, which fortuitously leads to McAllister helping to care for him for a time. And McAllister’s own C.O.O. is working against him behind the scenes with a powerful businessman named Chow. Will McAllister figure it out in time before his company is in danger? The Christian songs in the film, energetic and heart-felt, also add to the power of the film. There is one about dreams, and not deserving a second chance, but of course the Lord allows u-turns. And, as Dunn exclaims in one scene, “God is good!” Will McAllister finally surrender to God’s goodness? And what happens in the end between McAllister and his wife and son?

This film has earned our Dove seal for Ages 12+. Parents should consult our content listing as some parents may be okay with their kids just a bit under 12 watching the film.

This is a must-see film, as everyone needs a “Mulligan” in life and that’s what this inspirational and remarkable movie is all about.

A strong faith element throughout with a man sharing the gospel and the result is seen by changed lives.

A man of integrity forgives a man for another man trying to act unethically in his company; a man is consistent throughout in sharing how people need God in their daily lives; forgiveness for past deeds is shown by various characters.

Kissing by a couple.

Good Lord-1; Butt-1; a man mentions the “God malarky” but changes later on and he is told not to say anything about a man’s “Father” by a Christian man.

A young man is in a motorcycle accident; a golfer taps himself in the head with his club in anger for how he’s playing; a man breaks his own golf club in anger.

The drinking of beer in a few scenes; the drinking of champagne and a couple of toasts; a comment about “killing a whole bottle of champagne”; wine drinking; an unlit cigar is seen in a man’s mouth; a young man says he might have taken drugs when he was a teenager but he seems to be making the point his dad wasn’t around at the time.

Strong tension between a few characters; death and grief; a man attempts to undermine his supervisor; a son says he hates his father for his negligence in his life, but they get past it.