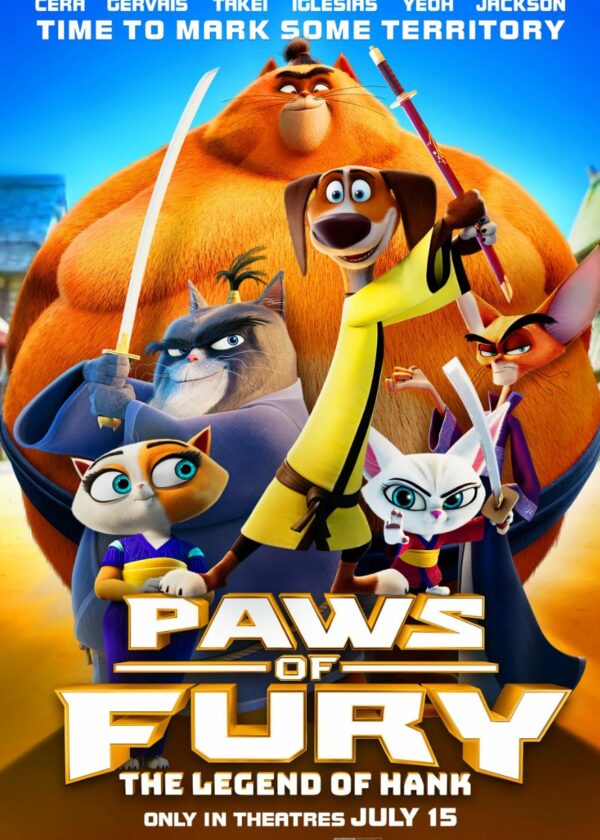 Paws of Fury: The Legend of Hank

Hank, a lovable dog with a head full of dreams about becoming a samurai, sets off in search of his destiny.

What if your greatest help came in the form of something you hated the most? That’s the premise of the fish-out-of-water (or rather dog-out-of-the-pound) animated comedy Paws of Fury: The Legend of Hank. In desperation, a village of persecuted dog-hating cats eagerly await their promised ninja warrior, who comes in the form of a sincere, inexperienced canine.

Paws of Fury is a familiar but timeless formula in the vein of Kung Fu Panda, providing fun, family action with an underlying message about grace and not judging others by outward appearances. Hank arrives with an awareness that he has very little to offer, and that’s only reinforced by everyone he comes in contact with. Mothers shoo their children away, and other generally avoid his company. His very presence is orchestrated by the cat seeking to destroy the town. Hanks calls on the help of a retired and reluctant teacher, Jimbo.

Hank and Jimbo’s friendship is a highlight, with both of them finding purpose in working together for a common cause. Being a jaded outcast himself, the teacher sees potential in a person the entire village not only dismisses but holds animosity for. The friendship is strained when Hank makes poor choices, but he learns from them.

The action and laughs are plenty, especially the inclusion of unmistakable voices such as Samuel L. Jackson as the teacher and Ricky Gervais as the villain. A few nods to Jackson’s colorful language in his other films is expressed in creatively constructed ways that may have parents doing a double take. In one scene, he yells in a familiar tone, “What the mother father cocker spaniel’s going on here?” Also, even though dogs don’t typically wear clothes, when Hank loses his robe in public and becomes embarrassed, it’s played for laughs.

For parents, the film rating lists the language but it’s only because of the double-take sound-alike expressions mentioned above. Additionally, there’s plenty of fighting and violence but it’s all light cartoon-style without dark consequences. Kids will enjoy the whimsical story and laugh-out-loud moments while adults could find several talking points to discuss, including avoiding being judgmental and exclusionary to outsiders.

Paws of Fury takes familiar themes such as accepting outsiders, not giving up, and mentorship and frames them in an impressive, animated background filled with top shelf voice actors.

Even though the story is rooted in Asian martial arts, mysticism isn’t a part of the story, but forgiveness, friendship, and overcoming evil are positive themes.

Even through their struggles, Hank and Jimbo are characters that serve as positive role models. Hank deals with pride, but realizes his mistakes and makes everything right again.

Creative sound-alike phrases for R-rated profanity, such as “What the flush?” and “What the mother father cocker spaniel’s going on here?”

The film is filled with cartoon-style violence with non-lethal consequences.

Hank loses his robe in public and is embarrassed.