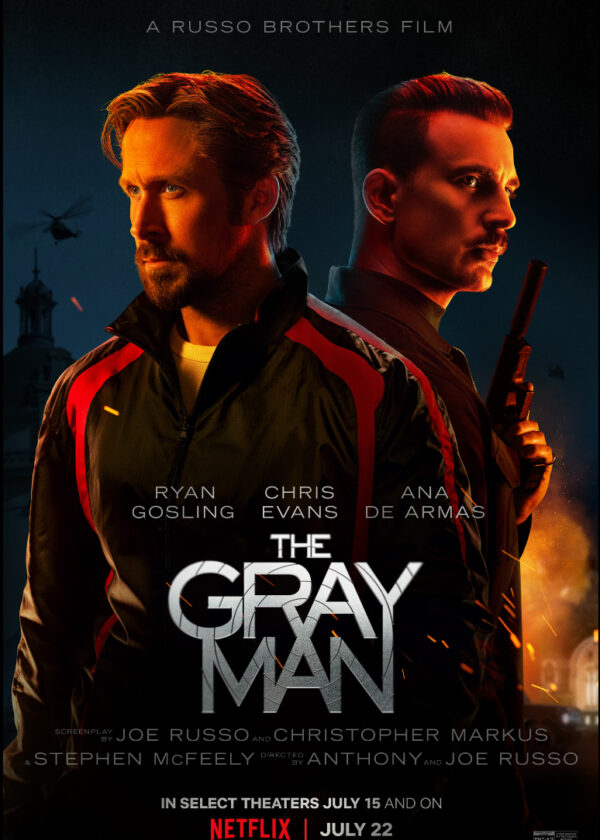 When the CIA’s most skilled operative — whose true identity is known to none — accidentally uncovers dark agency secrets, a psychopathic former colleague puts a bounty on his head, setting off a global manhunt by international assassins.

What would it take to put your life in danger? What is important enough to risk it all? The main character in The Gray Man, Six, has a history of tragedy and abuse, and others want to use his skill for violence for their own ends. But when he is confronted with the possibility of a deeper truth and the threat to his makeshift family, Six grows to realize he is truly a protector of those he loves.

Six was given a chance to get out of lifetime jail sentence if he would work as an assassin for the CIA. He takes the deal and becomes one of the best in the elite Sierra progam. But when one of his targets gives him a disk full of CIA corruption, Six chooses to place his life at risk to solve the mystery. When the corrupt CIA leaders send a psychopathic agent, Lloyd, after Six and the people he loves, Fitz and Claire, Six uses all his resources to save them.

The Gray Man is a simple action/spy movie with the basic tropes. Despite the familiar storyline (rogue agent must fight corruption and save those he loves!), the action scenes are extensive and phenomenal. The actors also carry this movie, many of them well known – Billy Bob Thornton, Chris Evans, Alfre Woodard, and Jessica Henwick. Ryan Gosling shines as Six, able to pull off the action as well as the drama and comedy. The Russo Brothers (of MCU Avengers fame) made the movie, and all the elements are well done. The theme of makeshift family as a redemptive element works and gives the action scenes meaning.

There isn’t any sex, nudity, or drug use. The violence has fighting and guns, with blood and Lloyd misses a few fingers at one point, and there are a couple torture scenes. The cussing pushes right up to the PG-13 boundary, complete with one F-word. A couple more words and this movie would have been rated R.

The Gray Man is a familiar rogue spy action movie that thrills with action scenes and connects with relationships and a makeshift family in a violent world, but the cussing is extensive for PG-13 and could be a concern for some parents.

The CIA uses Six as an assassin, but his character is a protector. He makes choices to place himself in danger to get to truth and save the people he loves when he could stick with lies or just save himself.

Several instances of sh*t, two uses of d*ck, several [email protected]@, one b*tch, one Jesus Christ, and even a single f-word.

Kidnapping of a child.