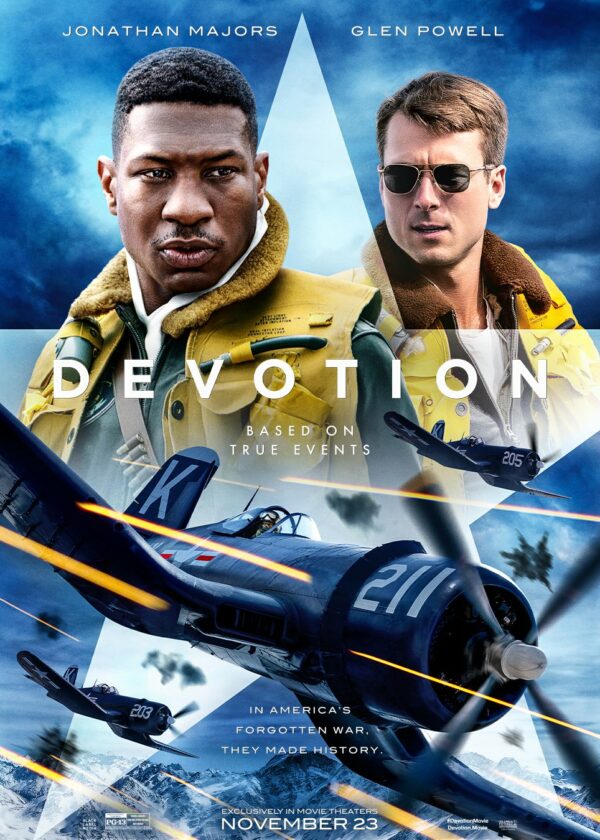 During the Korean war, an untold true story of the friendship between two elite Navy fighter pilots is profiled in this exciting new film from Sony Pictures. Jesse Brown, the first Black aviator in Navy history and Tom Hudner navigate friendship and patriotism while coming under fire from enemy forces and bigoted airmen. The story mostly centers on Brown, who experiences social prejudice and rejection from various members of his squad as well as other military colleagues. He works twice as hard to excel and make a name for himself and pave the way for future Black recruits.

Jesse Brown’s story to becoming the first Black aviator in Navy history was first told in a book by Adam Makos before being optioned as a film. Propelled by the current success of Top Gun: Maverick, “Devotion” is a historical period piece that features exciting displays of arial combat. At the same time, a friendship between Brown and Tom Hudner becomes legendary, with Hudner placing himself in harm’s way to rescue and defend Brown.

Brown is a family man, trying his best to stay focused on his career and not make any waves, even while encountering prejudice and aggression. He takes the opportunity to turn the other cheek, not out of weakness but as a way of staying above the fray and not jeopardizing his future.

“I can’t tell you how many times people have told me to give up, quit, die even,” he admits to Hudner. “That’s why you can’t always do what you’re told. If I did. I wouldn’t be here.” Although Brown confides in Hudner, he stands strong in front of others. This becomes noticeable and they begin to admire his determination.

In one memorable scene, actress Elizabeth Taylor encounters Brown while he’s strolling on a beach. She ignores the others and places special attention on him, which in turn elevates his status to his fellow servicemen. She invites him to bring friends to a party later that night, which provokes jealousy but is also a kind gesture to a good man seeking to earn the respect of his company. This is a great example of someone using their position to lift someone else up and a testament to the character of the famous actress.

Although faith does not play a huge part in the story, the self-sacrificial friendship is notable and could inspire viewers to consider how they can reach someone who needs a hand. The bond of friendship continued through the years and, in the film’s credits, viewers learn their descendants are still friends in present day.

As one would expect in a military-themed movie, there is profanity present and some talk of seeking out women while on leave, but there’s no explicit sexual discussion and the language stays in the PG-13 territory.

“Devotion” is a high-flying historical piece that features impressive cinematography and ariel stunts but is most memorable for its focus on friendship and perseverance. With various character arcs featured, viewers will find a nugget of inspiration to glean to help those in their lives who might need it.

Friendship and family are the two marks of Jesse Brown’s life, and he doesn’t waver from either. Tom Hudner never gives up on his friend, even when it puts himself in harm’s way.

Tom Hudner is a model of integrity, not only being a heroic airman but also for not succeeding alone. Jesse Brown’s love of his family is evident through the film.

Jesse and his wife share embraces. Some military colleagues seek out the company of women, but sexual activity is not discussed.

Racist men start fights that provoke Tom to act. Fighter jets shooting and killing each other.

Many men drink alcohol in bar and casino settings, although Jesse Brown makes a point of saying that he doesn’t drink. There is also some smoking.

Some scenes take place on a beach featuring women in bathing suits and men without shirts.