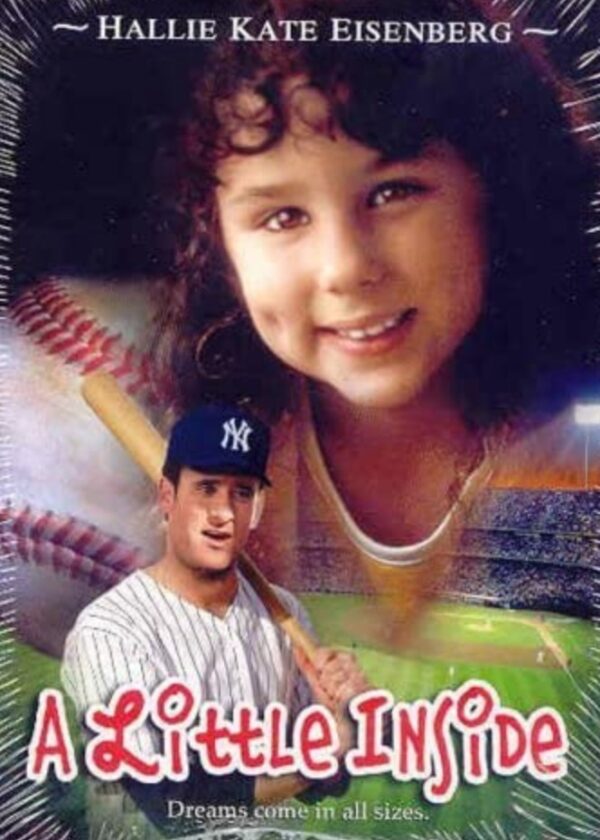 Baseball and the Ballerina

A professional baseball player tries to single-handedly raise his young daughter while pursuing his own dreams.

** Editor’s note: This 1999 movie was originally titled “A Little Inside.”

This movie features a fresh approach to a father/daughter story, and is enhanced by excellent performances by the leads, Hallie Kate Eisenberg as Abby Mills, and Benjamin King as her father, Eddie.

Eddie was an up-and-coming ballplayer with great potential, and he played for the Clippers, the New York Yankees minor league team. But tragedy struck when his wife was killed in an auto accident, and Eddie quit the team to raise his daughter. The movie opens with Abby attempting to play baseball in a kid’s league. She is seven years old and, although she loves the game almost as much as her dad, she’s not very good and is seen striking out. She has a passion for ballet as well, and she believes she could be an outstanding dancer.

The movie, written and directed by Kara Harshbarger, realistically shows the two as they attempt to rebuild their lives. Eddie is disappointed at first that Abby wants to give up on baseball, telling her that even Babe Ruth struck out a lot, but she replies, “I’m not Babe Ruth. I strike out all the time. I can’t hit at all. Maybe I shouldn’t play baseball.” Despite his telling her that she has the “Mills swing,” she replies, “I want to try ballet, Dad.”

Eddie talks with her coach, who reminds Eddie that Abby never got a hit. “She bunted!” Eddie replies, hopefully. But the coach tells him he thinks it’s great she’s trying something else.

Eddie finally accepts Abby’s dream to dance, and he solicits his neighbor’s help in getting her to some classes. He remains a typical father, asking her in one scene when she’s spending the night elsewhere if she remembered to pack her pajamas. And when she’s getting ready for a sleepover at her friend Krista’s house, he learns there are bunk beds in the bedroom, and he checks with Sarah, Krista’s mother, to make sure there are slats to guard the bedside. He also asks if they have a pool. “I’ll check on them all the time,” Sarah tells him. Between their neighbor, Nancy (Kathy Baker), and Sarah (Amanda Detmer), Abby will be in good hands.

When Eddie begins to work out with the Clippers again, he has hopes of once again getting into baseball. Coach Tom Donner (Frankie R. Faison) is willing to let him travel with the Clippers and train, but he lets him know that a young player with great talent will be in competition with him. He reminds Eddie when he left the team it was supposed to be for six months. “It’s been five years,” he says. Eddie had worked as a mechanic, and had a difficult boss who even taunted him, knowing his daughter was taking ballet, and he asked him if he was doing “spins” now and dancing. Eddie is happy to be back in baseball.

Abby, despite taking on ballet, still loves her father very much. In one touching scene, as he looks at a photo of his late wife, Abby’s mother, he looks sad and she rubs his shoulder and kisses him.

Eddie begins to do well, and it looks like when the Yankees’ third baseman is injured, that Eddie will be called up to the big leagues to play. All the while he has gone through a typical parent/child relationship, trying to spend as much time with Abby as possible while attempting to get back into baseball. In one scene he and Abby have words when she tries on makeup along with her costume. Eddie believes she’s too young to wear it, although Abby insists it’s for the ballet.

Without giving the ending away, we will say there is a scene in which we see Abby playing ball again, and she actually gets a hit! She also does quite well at ballet. Will Eddie make the big leagues for good? Or will he decide the road trips are too much time away from Abby? And when he and Sarah kiss, does that mean that Abby might get a new mother? You will have to watch to find out.

There are a few uses of language in the film, but the film also includes a loving relationship between the father and daughter, and it’s nicely dramatized, showing that tough choices, sometimes, have to be made. So, the movie has earned our Dove seal for Ages 12+.

This movie nicely illustrates that families can persevere and overcome hard times, and it has a lot to say about the bond between fathers and daughters.

Various people help a widower out with his daughter; a dad does his best to allow his daughter to pursue her dream and yet he tries to give her a normal life; a coach encourages his former player when he returns to baseball.

A man and woman kiss.

A few bar scenes and a few scenes of characters drinking beer.

Tension between characters; a girl back-talks her father but is corrected; the grief of losing a loved one.