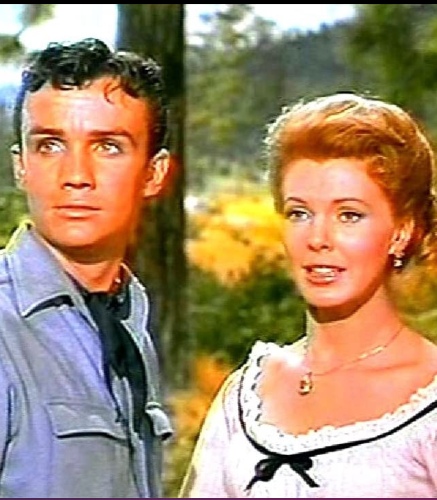 An outlaw gang robs Virginia City's bank and makes off with almost all of its money. The youngest member of the gang manages to get a job on the Ponderosa as a bronc-buster with the intention of informing the bank robbers of any posses that may threaten their hideout. While Ben, Adam and Hoss welcome the newcomer, Little Joe becomes suspicious of his activities.

The conscience is a tough taskmaster sometimes. That’s what a member of a bank-robbing gang learns after looting the Virginia City Bank for just about all the funds it had.

The idea was for Sam Kirby to stick around town and provide intel to the rest of the gang hiding out in the hills. So, following the plan, he gets a job with the Cartwrights at the Ponderosa. He introduces himself by busting a bronc that Little Joe can’t, but the introduction earns him more of Little Joe’s attention than he wants. Something about the new guy just doesn’t sit right with Little Joe, and though Adam and Hoss dismiss Joe’s suspicions as sour grapes, Joe just can’t get rid of that nagging feeling.

The town assembles a posse that splits up into groups, scouring the countryside for the bad guys who robbed the bank. Sam rides with Hoss, and when it appears they’re getting close to finding the robbers, Little Joe catches Sam just as it looked like he was reaching for a gun to shoot Hoss. Hoss, of course, can’t believe it and dismisses Little Joe’s suspicion.

Other pieces of Sam’s story start unraveling and it’s clear that he isn’t so much upset about being discovered as he is wrestling with his conscience. The Cartwrights — at least all except Little Joe — seem to be bending over backward to treat him as a welcomed part of the Ponderosa, and he can’t reconcile stabbing them in the back.

Little Joe’s questions hit a little too close to home and Sam starts a fight with him, but it seems more like a way to get out of hurting the Cartwrights. He storms off — back to the ranch, he says — and the rest of the Cartwrights encourage Little Joe to go apologize.

When Little Joe follows Sam to make his apology, it’s clear Sam isn’t Ponderosa-bound. He follows him and discovers Sam colluding with the bad guys. His suspicion was right all along. Or was it?

The bad guys hold Little Joe hostage while Sam finally makes it back to the Ponderosa. The sheriff is waiting there with more questions, and — surprise! — more details about Sam’s criminal background. The sheriff wants to take him inm but Ben says Sam has paid his debt to society and Sam now has the Cartwrights’ support.

All this does is stir up more conflict in Sam’s conscience. He picks a fight with Adam and storms off again, back to where the bad guys are holding Joe hostage. The bad guys are suspecting Sam has “gone soft” and when they propose killing Joe, Sam intercedes, saying Joe has more worth as a hostage. It’s a play to save Little Joe, while buying time to do the right thing.

There’s one final gunfight and much of the resolution is left to the audience’s minds to fill in. But there’s an underlying tone of redemption, of doing the right thing, of honoring friendship and forgiving past slights. As such, it merits Dove approval for all ages.

Second thoughts that lead to doing the right thing may come late but they are never wrong.

Sam, who helps rob a bank, wrestles with his conscience after being treated well by the Cartwrights, who are among the victims of the robbery.