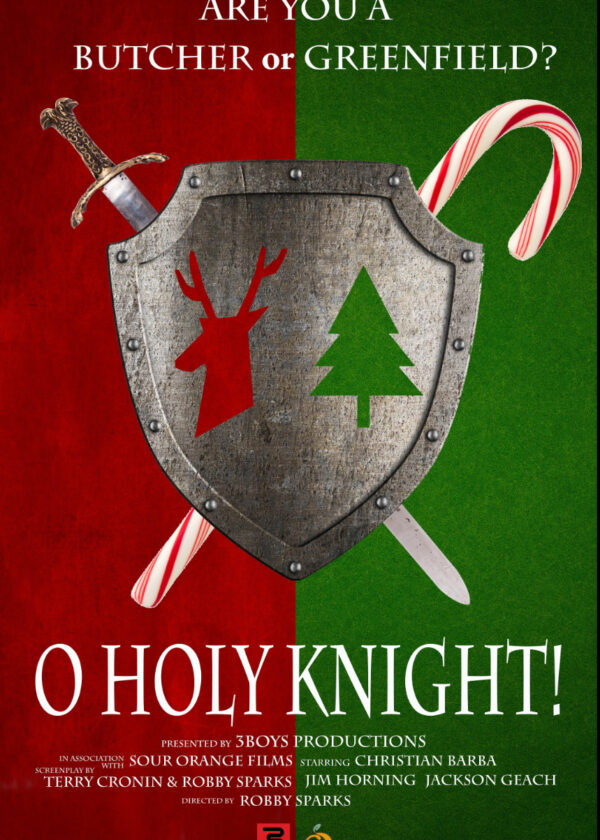 A man is thrust back in time, where he is expected to compete in a Medieval gladiatorial event.

O Holy Knight! is an enjoyable holiday film about the power of Christ’s birth. A store owner, who, after leaving the store one night, helps Santa when he is being mugged by two robbers. When he returns Santa’s hat, he receives some magic dust that transports him to medieval times, where he assumes the role as a knight. Called Sir Clouse of the Lord’s Star, it is in this new realm he meets a young chimney sweep named Black Pete. He must prepare for the Christmas Game of Champions where he will compete for the chance to win the Queen’s boon. The Greenfields and the Butchers are at war with each other and he now must fight Jeffrey Greenfield and Sir Angus the bull to bring peace to the land. Can Sir Clouse use both the miracle of Christ’s birth and death to bring peace and healing?

O Holy Knight! is a faith based drama and deals positively with issues such as honor and protection of the land. Christian viewers will enjoy faith-based elements such as prayer, and references to the Christmas story as told in Scripture. This film has additional positive elements such as integrity, honor and respect for their country.

The acting is great and the plot is fast-moving. The short length of the film, however, will leave the audience wanting better development of characters and plot. Additionally, use of medieval terms such as “boon” and “squire” without explanation of the context may leave viewers confused.

What is best about this film is the use of Scripture. Scripture is used strategically and anchors the main point of the plot. The miracle of Christ’s birth and death are interwoven beautifully and because of this, unity and peace are achieved between two fighting parties. This film gives hope that Christ can bring unity and reconciliation to our hurting land just as it did in the film. There are also additional positive elements such as violence used redemptively to protect people and other possessions.

Having said this, there are light scenes of violence such as a couple of scenes of sword fighting and an elderly man in a Santa suit being mugged. There is only light foul language, and no sexuality or nudity. There are also discussions about stepping in poop and fighting for bounty. Any of the objectionable content, however, does not go further than a PG rating, and no blood is shown in the scenes of violence.

O Holy Knight! is a family holiday film that both parents and older children will enjoy together. Because of issues with a couple of scenes of violence, as well as discussions about poop, however, this movie may be appropriate for younger children. Because of these elements, Dove gives O Holy Knight! the seal of approval for ages 12 and up.

Children will enjoy the overarching element of drama and the element of peril. Parents will like the use of Scripture as well as the interweaving of both pagan and Christian themes throughout the movie.

Prayer, reference to the wise men and Christmas story, a man is special because he wears the King’s star on his armor

Defending the elderly, protection of the land; doing the right thing even when it means risking your life

Two robbers mug Santa, one robber tries to beat up another man; discussion of someone being hit on the head, several scenes of swords in people’s hands; two sword fighting scenes

A brief discussion about a reindeer having a tummy ache