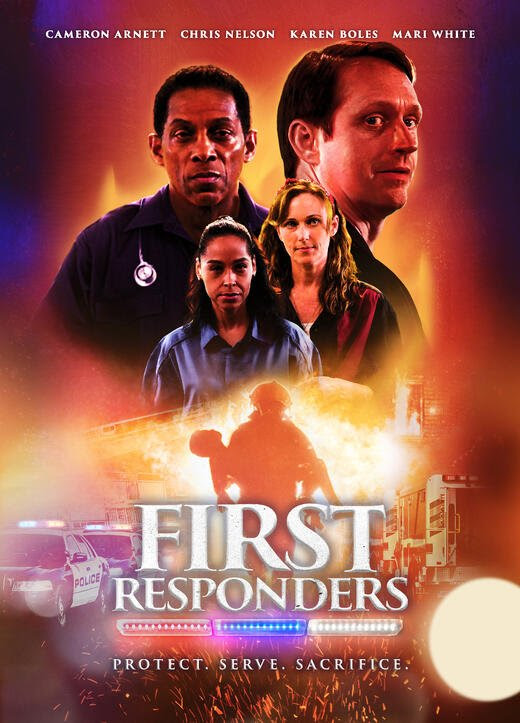 After her firefighter husband suffers a life-changing blaze, trauma therapist Karen Williams discovers the limits of her expertise and must face her own fears while trying to save her marriage.

The private lives of firefighters, EMTs, policemen, and policewomen and their families are profiled in the new faith-based drama First Responders. The story follows four friends, and their families as enjoy bowl together, lean on each other, and later deal with fallout from intense tragedies encountered during their responsibilities.

Nia, a policewoman, is shot several times during a random traffic stop, sending Darnell, her ambulance driver husband, into a crisis of faith and strained mental health. Her friend, Karen, a counselor helping first responders deal with grief, finds that her own husband has intense PTSD and trauma from witnessing a heartbreaking loss on the job. He and Nia are both overwhelmed with horrific nightmares of bullets fired and infernos. Darnell and Mark both wrestle with getting emotional help as their anxieties intensify.

With First Responders” placing the spotlight on the trauma and physical danger they experience, viewers may have a more compassionate outlook on those who daily put their lives on the line. Many of the characters put their faith in Christ and the power of prayer during their recovery. As one decides to retire early for the sake of mental health, his supervisor tells him, “Prayer is the most powerful tool you got.”

The film is a faith-based release, but the subject matter, including the life-or-death situations the first responders face, could be too intense for younger viewers. It’s very grounded in reality and includes testimonials from real first responders during the film’s closing credits.

First Responders is a memorable film paying tribute to the real heroes of society, the ones running into burning buildings, performing life-saving medical procedures, and maintaining law and order in an increasingly dark society.

Faith is a central theme in the lives of the four main characters. They turn to God in time of trouble and prayer is help up as a powerful weapon in the battle of the mind.

First responders and those who help them are portrayed as heroes and their lives, even experiencing mental issues, are shown as great examples of integrity and leadership.

The married couples show normal affection toward each other.

People die and are critically wounded in the line of duty, but it’s not graphic or gratuitous.

Prescription drugs are suggested to help with mental anguish, but the character refuses them.