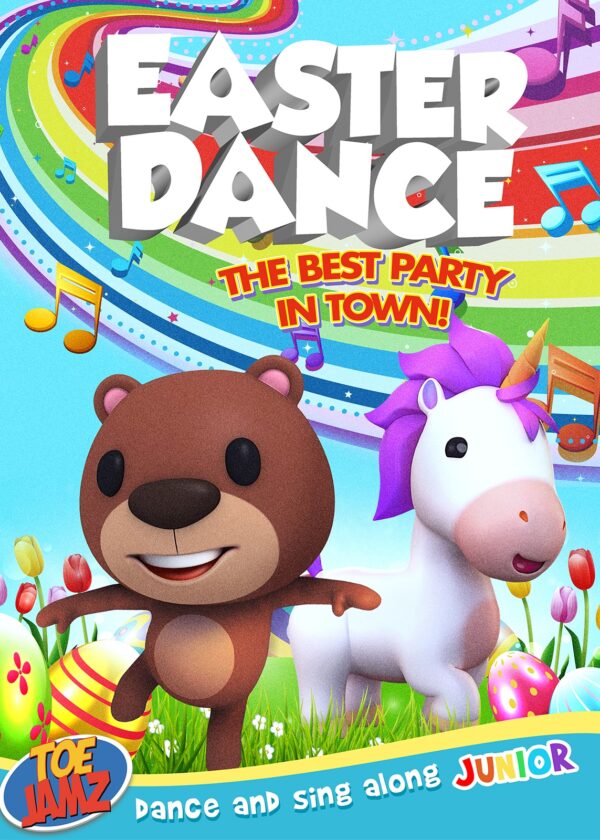 It’s Easter and all the inhabitants of Sunnyville are celebrating! Teddy the cuddly bear and his pal, Cuddles the adorable unicorn, are looking for the best party in town!

It’s Easter time and Sunnyville is where Teddy, a cuddly teddy-bear like cub, and Cuddles, a kind unicorn, live and play. They are both wanting to find the best Easter party in the area and set this as their goal. Cuddles says that the best party is the one you hear about the next day and wonder, “How did I miss that?”

Sunny the sun is asked if she ever gets to party. Humorously, she replies when it’s a cloudy day she dances around and that is the thunder that is heard! And the sun adds that lightning makes for cool party lights. In honor of Sunny, a rain dance takes place and Santa joins in! Some of the lyrics are, “Make it rain down while you boogie down!” Various songs and dances are featured in the film, and includes words like, “The chill, the thrill, get down!” In fact, a good part of the movie features dance-like videos with various characters joining in. Various characters join in, including a baby deer, a baby eagle, chick, a baby pig, elephant, and a cub.

Fritz the monkey, who serves ice cream and Easter eggs, is featured as both Teddy and Cuddles speak with him. Fritz says he makes sure everyone has a scrumptious good time. Fritz has a high voice and is a wise monkey. He says he has to write out a recipe for Mrs. March, and Cuddles and Teddy are surprised that he shares a sacred recipe. Fritz says that while some of his recipes are sacred, he just can’t resist sharing with his friends. It’s pointed out that sharing is another way to show someone that you care about them, and Fritz says, “Eggsactly!” with the pun intended. Fritz has been told he does a good job, and he replies that kind words encourage him. “Tell someone today that you appreciate them,” he says. “It will make their day!”

The group next does an appreciation dance and the lyrics to the song start off with, “Point your toes to the right, wiggle your fingers to the left!” The dances range from fast paced to slower and some are really fast and energy packed. Even Lolly the dragon joins in the fun.

A heart-shaped character named Lovey is asked by Teddy and Cuddles where the best party is and he suggests they contact Shelly, the turtle. Shelly is at Happydale City and Lovey says she can find the best party online. But before they leave for the city, a surf rider dance takes place, and the dancers are told to “Hold out your arms!” One of the songs features the line, “When I need your arms to hold me tight,” so a bit of romance is included in the song’s lyrics.

When they find Shelly, the turtle, she says she saved some of the best chocolate Easter eggs in her shell for later! Although Cuddles admits to gobbling up most of her chocolate, Shelly mentions it’s important to brush their teeth when they’re done. Teddy says, “Nobody wants to hug a teddy with rotten teeth.” Shelly is unable to locate the best party and she suggests that maybe they spend time at each party. Cuddles and Teddy are grateful that Shelly tried to help them, and Teddy says, “Friends never let you down.”

Of course, there are a few more dances, and a voice is heard saying, “Dancing is a present, so take off that bow!” Later, when Teddy and Cuddles run into Teddy’s dad, Mr. Buckle, a pilot, he says that just spending time with his family is a party. Cuddles says later that Teddy’s dad made sense, and “What matters is the people you’re with.” Teddy replies, “When you spend time with the ones you love, every day can be a party!”

Parents can discuss with their kids the importance of appreciating friends and family, and the importance of sharing with others. This movie has easily earned our Dove Seal for All Ages, due to its important themes and wholesome presentation

Important moral lessons are incorporated into this fun-filled, imaginative movie, and parents and kids can enjoy and discuss the film together.

Discussions are featured about appreciating others and sharing with them, and about loving others.

A romantic line about wanting a romantic interest in their arms, nothing graphic.