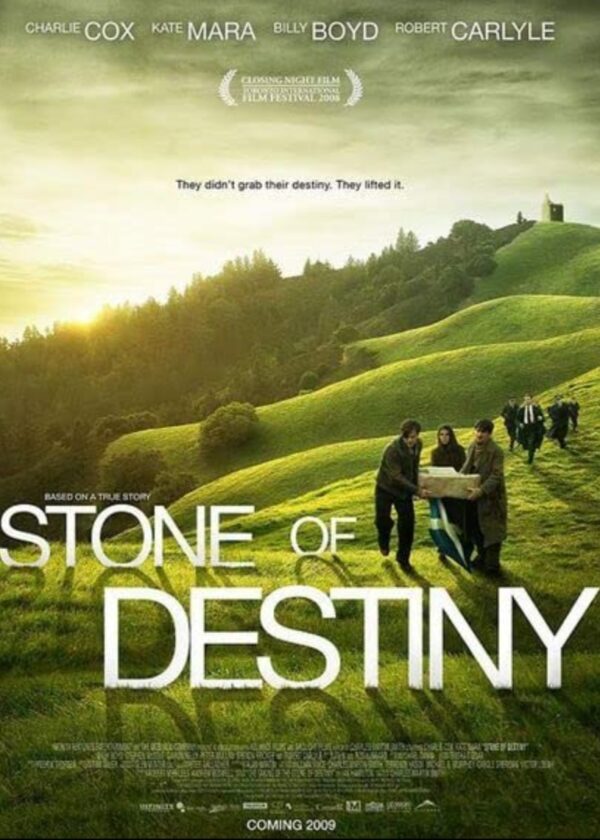 The story of Ian Hamilton, a dedicated nationalist who reignited Scottish national pride in the 1950s with his daring raid on the heart of England to bring the Stone of Scone back to Scotland.

Stone of Destiny is a Scottish-Canadian film based on the real events of the removal of the Stone of Scone from Westminster Abbey after it was taken from Scotland by the English. Revolving around a group of 1950s Scottish nationalist students, who want to make a difference for their cause in establishing independence from England and securing a parliament for Scotland, the movie portrays the steps they go to in order to steal back the stone for their country.

Ian Hamilton (Charlie Cox) and Kaye Matheson (Kate Mara), along with two trusted friends, devise a plan to undertake a risky enterprise that they know will land them in jail. There are funny and tense moments that move the narrative forward with superb performances by all, that raise the spirit of the fight for freedom in viewers, and ask us to root for the very people who are about to commit a crime. They do receive their dues, although they are never sentenced for this escapade, and moreover they are ultimately not remorseful for having broken the law, and in fact become national heroes. For this reason, Stone of Destiny contains some mild language, but overall could open up a conversation about the limits one should go to when fighting for lasting change.

Hamilton’s personal struggle for purpose is highlighted within this storyline where his father reminds him that “this is a world for doers, not for dreamers,” Ian cannot ignore his personal call to walk the path of a revolutionary in an attempt to secure a symbol of freedom for the country he loves so much, which is expressed in the sentiment at the end of the film: “We fight not for glory, not for wealth, not honors, but only and alone for freedom, which no good man surrenders but with his life.”

A fun watch, that has the viewer on the edge of their seat. The charming Scottish countryside, and passion the characters exude over their cause is heartwarming at times and full of adventure.

Stone of Destiny is an exhilarating taste of Scottish history that promises to deliver intrigue and incite debate.

While main characters fight and sacrifice themselves for what they believe is right, they ultimately break the law to accomplish their goal.

Sh*t used in one scene.

Criminal choices are made for a revolutionary cause where main characters do not express remorse.