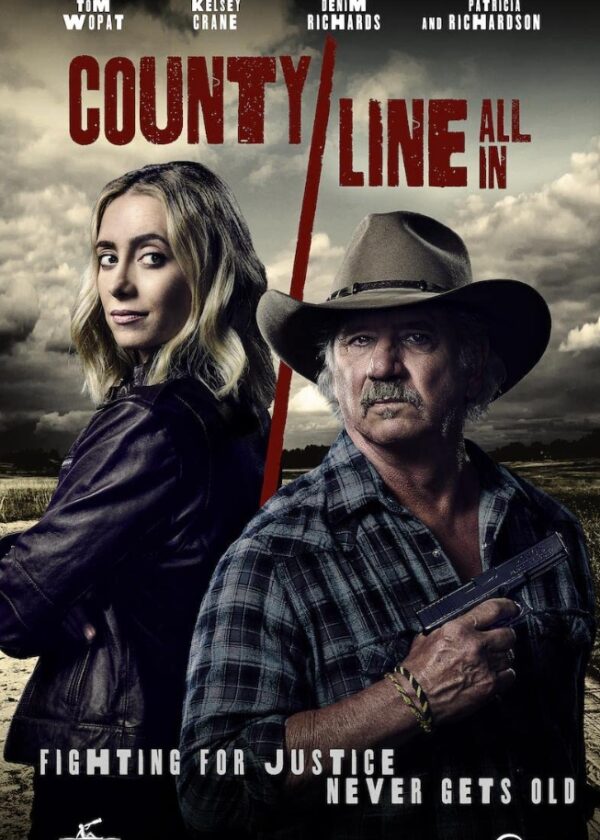 County Line: All In

When a not-so-popular lawyer is killed on the county line, two reluctant sheriffs from neighboring counties must learn to work together if they want to catch the killer,  who continues to strike.

County Line: All In is an intriguing whodunit, where two sheriffs, who are polar opposites, finally put their heads together to catch a mysterious killer, who is wreaking havoc in their counties, and it’s fun to watch. Sheriff Jo (Kelsey Crane) with her young, modern ways, and  “Old School”  Sheriff Alden (Tom Wopat), who’s on the verge of retirement, are resentful of and resistant to each other throughout, which often adds a comic flare to this already well-written film. Sub-plots are rich, and the main storyline is complex enough to keep the viewer invested throughout. There are many suspects, and lots of theories, and just enough action to consistently propel things forward at a decent pace, and surprises abound.

While there is definitely some fist fighting and characters are bearing and shooting guns, no one is hit by a bullet onscreen, but someone does die in a car explosion, and  another person is badly injured. Someone also dies in a car from carbon monoxide poisoning, and a girl is kidnapped and threatened. Overall, these instances are mainly expected occurrences given the storyline, and are treated tastefully and mildly for a film that borders on being a thriller and involves murder.

As well written as this movie is, it’s the performances that make it memorable. Alden, himself, though charming and strong, is struggling with facing retirement, and filling the void left by his late wife, and Wopat is, indeed, a well-seasoned actor, who is a pleasure to watch, which is true for all of the main cast — they each bring a maturity, expertise, and flair to their roles that makes them completely believable as small town characters, trying to solve a big crime. Alden and Maggie (Patricia Richardson), who runs the local diner Alden frequents, have a natural rapport, and the viewer is rooting for this duo to become a couple in their old age.

And it’s not just the older cast who shine, for Alden’s daughter Ember (Abbi Butler) brings an emotional intensity to the screen, as she struggles with trauma from her time serving in Afghanistan, and from the loss of a friend that leave her having a big decision to make. It is, in fact, quite clever how these subplots all tie together to help reveal the killer that is on the loose.

Kelsey Crane must be recognized here for holding her own as Sheriff Jo, alongside such a talented cast. She brings the tension to the screen, but shines while she’s doing it — Jo and Alden are fun to watch together, as their banter, and the lessons they learn from one another are at times heartwarming and poignant. She commands the screen in a very real way, and before long the viewer is rooting for her.

This dynamic duo realizes they are unstoppable when they put their minds together, as more innocent people, like the bumbling Barney Fife-like cop, who’s life is on the line, and others, who are either suspects or heroes, get pulled into the action. The end is both refreshing and full of resolution the viewer has been waiting for.

As two unlikely characters find support and friendship through understanding, cooperation, humility, and appreciation, we are reminded that opposites attract, and to never judge a book by its cover.

Police and lead characters risk lives to fight crime and save the innocent.