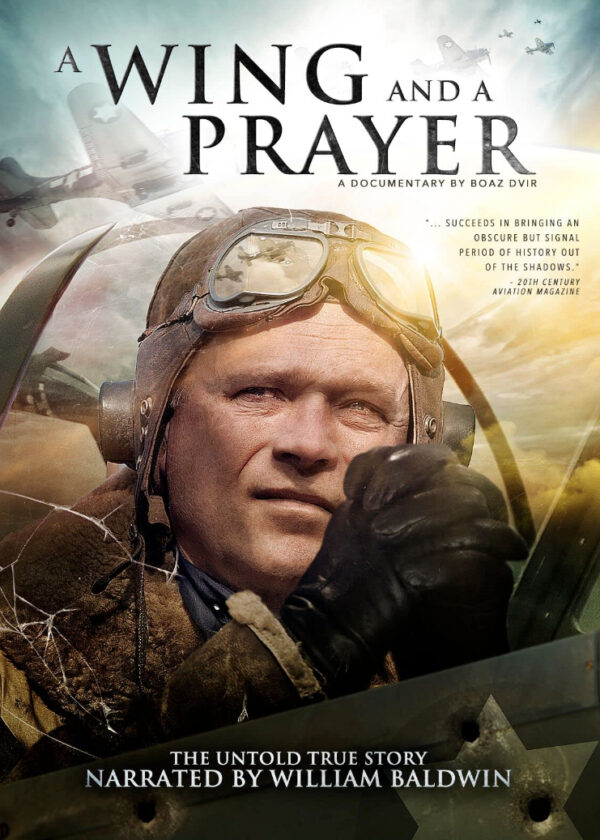 A Wing and a Prayer

Narrated by William Baldwin, the untold true story of WWII aviators who carried out secret, illegal operations in 1948 to prevent a second Holocaust.

The incredible power of a small band of people who believe that they can overcome great odds is nicely illustrated in this historical and fascinating documentary. Largely based on the exploits of aviator Al Schwimmer, whose real first name was Adolph, this film shows how he, post World War 2, managed to fly in weapons to Israel, which helped them survive and become a nation in 1948. Narrated by William Baldwin, this film by Boaz Dvir makes it clear—that a few people who believe in their efforts can make a marked difference, even in the course of history.

Nicely supported by several interviews by key players in the task, not to mention many old videos and photos, maps, and dramatic music, the documentary showcases a first-class job in its presentation.

Included in the footage are images of concentration camps, which no doubt fueled Israel’s desire not to be helpless in the hands of an enemy ever again. Several World War 2 aviators are featured, who carried out secret, illegal operations to prevent a second Holocaust. As later mentioned, they found pardons years later by the U.S. A lot of video and information is packed in this documentary’s 61-minute runtime.

Among the things the viewer learns is that Al Schwimmer’s background included nothing to indicate that he would lead a covert mission to help the Palestinian Jews. He had served as an air force flight engineer. Professor David Harmon, a friend and professor at Howard Universities, speaks of the close calls that Schwimmer encountered, planes being “buzzed” by German planes.  He shares that Schwimmer had been to Tel Aviv on several occasions and his mother asked if he would try to find any trace of her family. Most of the extended family had perished during the Holocaust.

The footage which is featured includes the interiors of the planes, the pilots who flew them, and old buildings, not to mention the planes being bombed with ammunition in the air. The documentary shares historical perspectives, such as the British controlling Palestine from 1920 to 1948, and it’s stated by a man named Lowenstein that the Arabs had oil, and the Jews had nothing. The British had offered the Arabs all of Palestine and the U.N. had offered them half. Two thirds of Palestine was made up of Arabs, and they considered the offer an insult. Hence, the battle by the Jews to fight back and to gain an independent nation.

It’s learned that John Schwimmer, Al’s father, encountered at least 20 expressions of Anti-Semitism, and he reacted violently. Al, on the other hand, was more of a pacifist and decided to use his covert transportation of arms to strategically ensure Israel’s survival.

Future Prime Minister David Ben-Gurion set up funds for the secret missions and wanted to acquire weapons from the U.S. However, the U.S. refused to sell arms to Israel and in fact the first president to do so was President John F. Kennedy, years later. But this didn’t stop Al, who is described as a man who exuded confidence, and if he said something, you believed it. Czechoslovakia finally offered weapons to help. It’s pointed out that the attitudes toward Israel in the U.S. are much different today than they were then. Included in the key players during this period in history is Lou Lenart, a fighter pilot, who says he wanted to help secure a home for Palestinian Jews, as he mentioned his grandmother at age 70 was shoved into a gas oven in Auschwitz.  Interestingly, one man who aided the cause was an American who plainly says he doesn’t even know why he helped! Some would attest it to divine providence.

Another interesting fact is that the Jews secured $12 million worth of weapons, and then found German eagles on the rifles. They were previously used by the Germans! Al also had to outfox the F.B.I. to continue his mission but he managed to do so. There are countless interesting facts contained in this film, including what happened to the key players and the result of a trial.

This film clearly shows the underdog mission of the Jews to establish a nation, and it has earned our Dove seal for Ages 12+. It contains mild language, some scenes of alcohol, and smoking, but Israel’s determination to forge their own nation is a captivating story.

This engrossing documentary will inspire you, as it shows the tiny nation of Israel overcoming giant enemies during the time to establish a nation of their own.

The faith of the Jews that God would be with them.

Several people, even Americans, helped the Jews in their covert operation in getting weapons to the Jews of Palestine; the loyalty and gratitude by several Jews to Al Schwimmer, for his determination to save Israel.

Footage of planes being shot down in mid-air; explosions on the ground during the war and post-war; comments of gas ovens and a 70-year-old woman being shoved into one; brief footage of a concentration camp; photos of people holding rifles.

Several photos or videos of people with wine, drinking, smoking cigars and cigarettes.

A black and white photo of women in short shorts, holding rifles.

The goal of the Nazis to destroy the Jews.