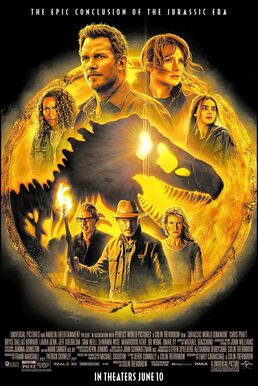 Four years after the destruction of Isla Nublar, dinosaurs now live–and hunt–alongside humans all over the world. This fragile balance will reshape the future and determine, once and for all, whether human beings are to remain the apex predators on a planet they now share with history’s most fearsome creatures in a new era.

Jurassic World Dominion does not feel like a throwback to the original in the same way that the first sequel did. It has only been four years since its last inception. Instead, this felt like a whole new movie. Of course, there were a lot of close-up profiles of T-Rex villains, to remind us of exactly what we’re watching; and the familiar trope of the mad scientist prevails.  This time in the form of a powerful pharmaceutical company trying to profit at the expense of the rest of the world and the familiar team of good guys come back to life, who went their own way years ago, but all end up in a Jurassic Park-like setting.

Dominion dominates, as the viewer is propelled into what feels like an ultra-modern, and at times surreal world, where dinosaurs, are inevitably creating all sorts of dangerous scenarios.  They roam city centers looking for food and interacting haphazardly with man-made structures.  Inevitable poachers and profiteers coming out of the woodwork, as we witness underground dinosaur-stealing rings that look like a bar scene from Star Wars – all visually spectacular.

As several subplots ensue, they all revolve around Owen Grady, our favorite dinosaur whisperer (Chris Pratt), and his captivating love interest Claire Dearing (Bryce Dallas Howard), who is as magnetic together as ever.  They race against time and overcome all odds to save their loved ones.  A very particular family member is harboring secrets that even she doesn’t understand, which turns out to be an intriguing twist on the theme of technology versus man. Likewise, seasoned actors Laura Dern and Sam Neil rejoin the cast as good scientists Ellie Sattler and Alan Grant. rekindling their own onscreen chemistry, they are driven to stop the wild manipulations of DNA that have unleashed a new beast on earth, and the anticipated and beloved Ian Malcolm (Jeff Goldblum) reprises his role with his usual dose of welcomed comic relief.

In line with a sci-fi film, wild chase scenes with dinosaurs instead of cars are some of the highlights of this film, accompanied by creative means of escaping precarious and monstrous situations. The film is fast-paced and exhilarating, and the editing keeps the viewer engaged throughout, as we bounce from one storyline to another.

The film is also impressive for its lack of gore and violence, aside from dinosaurs fighting their own kind, and roaring loudly while behaving as predators do. There are just moments of fear, as viewers sit on the edge of their seats during several nail-biting scenes. There is a man who appears to have his arms consumed by two dinosaurs but little to no blood is shed, and his death presumably occurs off-screen. The dinosaurs are shot at and stabbed. One man is sprayed by a dinosaur and is presumably poisoned. This all seems quite benign compared to this movie’s predecessors. In fact, this feels somewhat like a superhero movie, for the ability to survive in these chaotic and otherworldly situations, seems ultra-human. Moreover, there is a magical quality to this film that even bears a Han Solo-like character – a bounty hunter-type, rebel with a hero’s heart, and her own airplane.

If older children can handle the heart-stopping threat of monstrous beasts seeking destruction, I would venture to say this is a film for just about everyone.  The film has clear demarcations between good and evil – many characters stand up for what is right and are willing to sacrifice themselves for others. In these ways, there are moments of predictability, as we are all rooting for the good guys. There is one mild swear word and the only weapons drawn are tranquilizer guns and tasers, which are used mostly on dinosaurs, but in one scene, briefly on another person. Better yet, there is an overarching message that involves cohabiting with others, regardless of differences, and finding ways to peacefully coexist – it is heartening to see good and moral science prevail.

Jurassic Park Dominion does not disappoint, as it takes the viewer on a wild ride while highlighting a gateway to hope and possibility.

The main characters willingly face danger to save others and make morally correct choices.

There is a good deal of anxiety-inducing fear while wild dinosaurs frantically pursue humans.