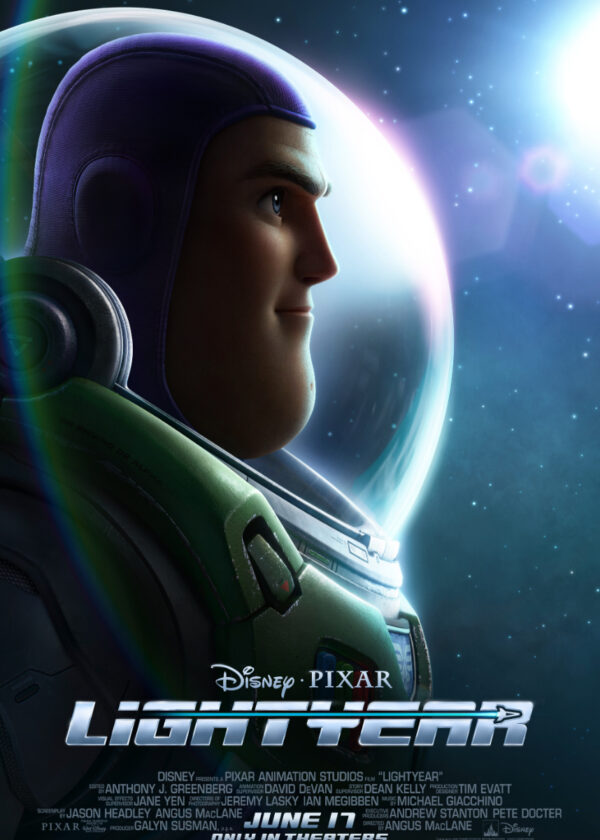 While spending years attempting to return home, marooned Space Ranger Buzz Lightyear encounters an army of ruthless robots commanded by Zurg who are attempting to steal his fuel source.

This fast-paced, high-energy movie features a lot to like. The characters are memorable, and we learn about the origins of Buzz Lightyear (voiced by Chris Evans). The first Toy Story movie premiered in 1995, and Buzz Lightyear was a space ranger toy that Andy loved, based on a movie he had seen. Well, apparently, this movie is supposed to be the movie that Andy saw. Although Chris Evans does a good job voicing Buzz, it took me a while to adjust, considering Tim Allen had previously voiced Buzz for the four Toy Story installments. From what I understand, the director wanted a different actor for this movie as he wanted the character to be more serious and straight forward.

Buzz is partnered with a woman named Alisha Hawthorne (Uzo Aduba), and she is a loyal and capable assistant. She aids Buzz in his various quests, but Buzz makes a few trips to space on his own, and Alisha ages while Buzz only ages by seconds. I could hear a few kids exclaiming their excitement as Buzz uses a saber-like space rifle, runs from trouble, and meets various potential catastrophes head-on while in flight. One of the positive elements of the film is Buzz’s determination to finish each mission he begins.

Not that there aren’t a few concerns for families to be aware of. In the film Alisha becomes engaged to a same-sex partner, Kiko. After Buzz returns from some hyperspeed testing runs, when Alisha mentions her engagement, Buzz asks, “What’s her name?” He was obviously aware of her same-sex attraction.  And one partner becomes pregnant, although how that happened is not explained. In a later scene, we see time has passed and Alisha is celebrating her 40th anniversary with Kiko, and they briefly kiss. These scenes are brief, but will be a concern for conservative families and parents would probably wish to discuss the scenes with the kids.

There are, thankfully, some good moral lessons, such as needing help from others. Buzz tends to be independent, but he gets into a few jams which requires the help of his fellow agents. Previously, he was asked by a rookie if he was sure of a decision. “I’m Buzz Lightyear,” he replies. “I’m always sure!” Yet later, in one scene, he is working with new rookies, which includes Alisha’s granddaughter, Izzy (Keke Palmer) and Alisha and a few others wind up trapped in a red tube. Buzz is trapped by himself and hopes to push them toward a device that will free them. But Alisha convinces him that if he joins them in their tube, together they can extricate themselves from the trap, which they do. Another new-and fascinating character, is Sox, a mechanical cat, that has a lot of knowledge and helps Buzz out on occasion. He also provides comic relief. In one scene, Buzz is ready for sleep, and Sox provides “white noise” for him to sleep by and it’s a humorous moment. But Sox and his ability to help is not to be questioned, as he releases a few darts to Buzz’s enemies, putting them to sleep.

The gadgetry is interesting, including I.V.A.N. (Internal Voice Activated Navigator), which guides Buzz while on his missions. Buzz and company must also battle slug-like aliens which are quite revolting looking. Although I found the story to be, for the most part, interesting and ever moving, I did find one reveal about the evil Emperor Zurg, Buzz’s ultimate enemy, to be a clunker. It changes what we know about Zurg in the original Toy Story movies, and the revelation just didn’t really work for me. However, the comedic moments work well, such as when Sox joins rookie space rangers to help Buzz. After a frightening event, his response is, “That was utterly terrifying, and I regret having joined you!’

Buzz has his humorous moments too. In one scene, he wants to touch fingers with a fellow ranger, and say, “To infinity-and beyond!” But the rookie, not understanding, asks, “Are you trying to get me to pull your finger?” In addition, the movie shows the audience a possible future. Sandwiches in the future have two pieces of meat on the outside, and one piece of bread in the middle, so as to cut down on the bread. And, as one ranger says, “You’re able to lick the juice off the meat!”

The movie is not Dove approved. There may be some parents who may be fine with their children watching the movie, but due to Disney’s stance on same sex relationships, parents with a strong biblical worldview will want to pass on seeing this film with their children.

Despite the concerns raised, this movie does a good job in showing the need for the help of friends, and in completing what one begins.

New rangers do their best to help Buzz; Buzz is determined to finish each mission; characters save lives.

A same sex couple become engaged, and years later we see the women briefly kiss as they celebrate their 40th anniversary.