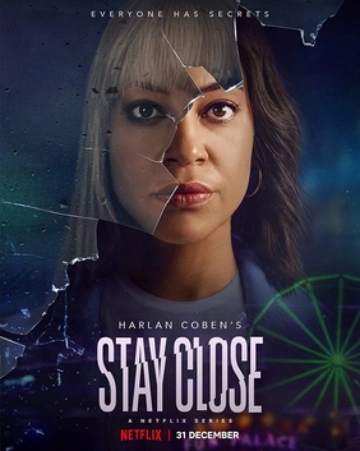 The lives of a photojournalist, a soccer mom and a homicide detective are disturbed by a terrible event from the past.

Netflix viewers are enthralled by Stay Close, a one-season miniseries based on the well acclaimed Harlan Coben novel, released in December 2021. This thriller is teeming with solid performances, well-placed flashbacks, suspenseful music and unexpected twists that help move the narrative along rapidly. A British production, Stay Close employs engaging English actors, such as Eddie Izzard as Harry, who are believable, yet enigmatic — you can’t stop watching!

In episode one, when Megan Pierce (Cush Jumbo) receives a mysterious gift on her doorstep, we immediately understand that the perfect life she has constructed after escaping her dysfunctional past as Cassie Sutton, is about to fall apart — terror-stricken and confused, from that moment on, she is simply magnetic. The frantic pace of these episodes has viewers fixated, as Megan resuscitates her past in order to discover where the threats lie and how to eliminate them, becoming increasingly undone, as she herself, like her former beau and photographer Ray (played convincingly by Richard Armitage) get more deeply ensnared in an effort to uncover the truth.

This means revisiting bygone friends and places, for both of them, especially the woods where an unsolved, brutal crime took place 17 years ago that has haunted local detective D.S. Broome (James Nesbitt) ever since. Broome is a capable and highly instinctive, though sometimes brooding cop, who is obsessed with connecting a series of deaths that have taken place every year on the same day. It is arresting to watch Broome and his ex-wife/partner Erin (Jo Joyner) also unravel clues, and it’s refreshing that they themselves are the light-hearted relief from the tension the rest of the characters create.

While Stay Close is for a mature audience, it is tasteful, as far as most thrillers go, with minimal violence, swearing, and gore, which contributes to its watchability, advanced by every aspect being called into question in the viewer’s mind, for secrets abound. Ray, for instance, who the viewer wants to root for, confesses to his oldest, most loyal friend Fester (Yousef Kerkour) in episode 4: “when I black out, I don’t know who I am,” and though he is endearing in his devotion to Cassie after all this time, in episode 6, Lorraine (Sarah Parish), Cassie’s long lost mother figure, states that Ray “was addicted to Cassie,” and with this, the viewer’s imagination, once again, takes a trip down crazy lane, not knowing who to trust!

Further, a perfectionistic, psychopathic couple Ken and Barbie (Hyoie O’Grady and Poppy Gilbert), who shockingly perform musical dance numbers as they murder and torture, contribute to the suspense throughout, and are fascinating to watch, bordering on comical, for all of their quirks, and bizarre neuroses, which further serve to highly disrupt the normality of the small English city where the drama takes place. By episode 5, when some key pieces are finally put together, the viewer is ready for anything.

Stay Close is thrilling indeed, with tight direction, apropos hand-held camera devices, compelling sub-plots, and eerie music that is congruous. There are a few continuity errors and narrative slights that do stand out, but overall, Stay Close is a must-see. Each episode ends on a clever cliffhanger, including the last, where after the surprise killer is revealed, there is one last secret that is overlooked. As a result, an integral murder has gone unsolved, and as Megan stares off into the distance, we grasp the significance of the fact that only she and the viewer know who did it. It looks like we will just have to wait for the next 14 of Harlen Coben’s 31 novels that are slated for adaptation by Netflix to be back in the fast lane of whodunit.

In perfect Cobeneque style, fans and newcomers alike are taken on a wild ride that promises not to disappoint.

The main cops are good guys, though Harry is a drug addict, his heart is to
care and look out for others.

Unmarried couples in bed together talking and sleeping without consequences,
minimal kissing.

F***, sl** sh** on several occasions, and the English hand sign equivalent
to the middle finger

Harry is a heroin addict, adults drink in bars and at home, teens enter a bar
with intention to drink but they do not